Azealia Banks keeps it surprisingly polite at the Black Cat 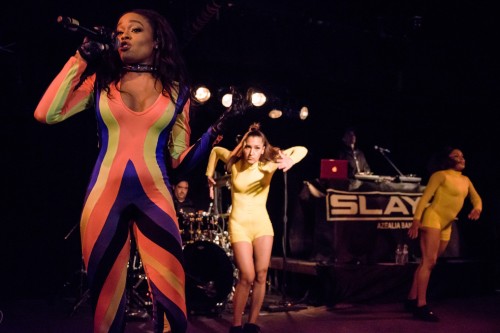 Since breaking through in 2011 with her debut single “212,” Azealia Banks has been better known for what she does on social media than on SoundCloud. That buoyant kiss-off introduced listeners to Banks’s deceptively sweet rap persona; she would ruin you with a smile before dancing on your grave. But for Banks, it’s been difficult to keep that persona from cropping up in “real life,” and she’s feuded with label bosses, producers and other artists at a head-spinning rate, often resorting to misogynistic and homophobic insults.

For an artist defined by being outspoken, Banks let the music speak for itself on Tuesday night at the Black Cat, where she made her Washington debut after canceling two previous concerts. In a spiked collar and a skintight, rainbow-striped get-up, Banks was flanked by a DJ, a drummer and a pair of yellow-clad dancers who accompanied her through a set list heavy on songs from her 2014 album “Broke With Expensive Taste.” But aside from a few “make some noise” entreaties, Banks didn’t banter with the crowd or offer notes about her songs. Perhaps she finally learned that old lesson: “If you can’t say something nice, don’t say nothing at all.”

This entry was posted in Music and tagged azealia banks, Washington Post. Bookmark the permalink.