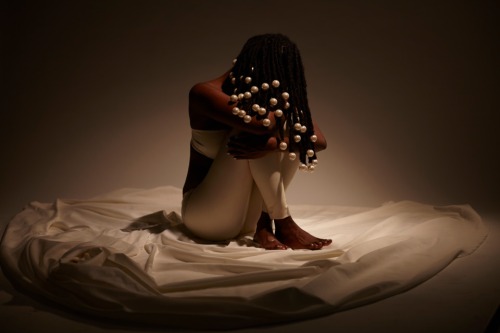 The L.A.-based R&B star’s debut album, “Take Me Apart,” is a stark and powerful personal statement.

There’s a moment during Kelela’s new single “Waitin” where she sings, “It’s all I dreamed of, it can’t get started.” It’s a lyric heavy with yearning and anticipation, but if it sounds familiar, that’s because it is: she also sang it on “Bank Head,” her first single, which was released back in 2013. Plenty has happened to the 34-year-old singer-songwriter in the intervening years, and with the recent release of her debut album, Take Me Apart, all that she’s dreamed of is finally getting started in earnest.

Since debuting in 2013, Kelela has quickly become a key figure in R&B, pairing the genre’s sensuality with the future-is-now sounds of club music from around the globe. With her versatile voice and confessional lyrics, she’s found power in vulnerable places and examined the prismatic angles of relationships, from the promise of giddy infatuation to the aftermath of painful breakups. Take Me Apart is her most expressive and expansive work yet, and is the culmination of years of musical growth that began in the DMV.

Kelela was born in D.C., the daughter of Ethiopian immigrants, and grew up in Gaithersburg, listening to and learning from singers like Mariah Carey, Cheryl “Coko” Clemons of SWV, and Amel Larrieux of Groove Theory. She graduated from Magruder High School and studied at Montgomery College and American University, singing jazz standards at venues around D.C.

Singing in jazz cafes soon gave way to singing in a progressive metal band, but Kelela wouldn’t find the perfect fit until moving to Los Angeles in 2010. There, through mutual friends, she connected with Fade To Mind, a collective of DJ-producers at the center of the underground club music world. Her 2013 mixtape Cut 4 Me was a stunning debut from a seemingly fully-formed artist who seductively sang about love, sex, and heartbreak over pneumatic, elastic beats constructed by some of the most innovative producers in the scene, like Los Angeles talents Kingdom and Nguzunguzu.

The juxtaposition of Kelela’s warm, organic vocals and the cold, mechanical productions was by design. “I’m trying to show you how tender I can be in what comes off as such an unkind surrounding,” she says. “The bed I’m sleeping in for all my music is what people wouldn’t expect you to be so soft and tender on.”

That contrast also drove 2015’s Hallucinogen, a six-song EP that explored the life cycle of a relationship. On it, she stepped up her songwriting game and added new contrasts to the mix, teaming with Björk-collaborator Arca for a pair of off-kilter experiments but also delivering radio-ready R&B jams reminiscent of ’90s hit-making label So So Def Recordings. “She wants to have shock elements in her music,” adds Bok Bok, a London-based producer who has worked with her since her first release. “I don’t know why it works so well with her, but I think she finds it to be challenging in the context of R&B and pop songwriting.”

On Take Me Apart, Kelela is unafraid of challenges, in her songwriting or otherwise. The album tells the story of an “It’s Complicated” relationship, full of almost-reconciliations and late night realizations, of pain and healing, of growth and learning. It’s also her richest, fullest offering yet, bounding from club-ready jams like “Waitin” and “Truth or Dare” to melancholic ballads like “Better” and “Turn to Dust.”

In making the album, she collaborated with old friends like Bok Bok, Arca, and Jam City, as well as Romy Madley Croft of The xx, London upstart Kwes, and industry heavyweight Ariel Rechtshaid, forging an album that is part Janet Jackson, part Björk, and all Kelela.

“The sentiment behind Take Me Apart is putting your shit out there,” Kelela says. “It’s an empowering thing to tell somebody to take me apart. If you’re inviting somebody inside in that way, then you are clearly in an empowered position, you are comfortable enough to do that.” To embody that theme in the album art, she quickly realized that she’d have to be naked (“probably the hardest thing to do”) and take photos of the “full-spectrum” of her self-perceived strengths and flaws. “It had to be scary for me or it’s not going to be real.”

Vulnerability, empowerment, and general realness are certainly present in her lyrics, which delve into relationship issues and bedroom politics with equal frankness. Like posing nude, Kelela goes all the way with her pen, often in a way that implicates the people in her life. “It’s something that everybody that wants to be in a relationship with me is signing up for, but when it comes down to it, it can be difficult, like ‘damn, you feel like that’ or ‘I didn’t know it’s like that,’” she laughs. “I’ve gotten direct feedback that it is daunting, and I have a lot of compassion for that, but I gotta keep it real.”

Kelela certainly keeps it real, in her music and outside of it. Last month, she wrote an eye-opening op-ed for Resident Advisor entitled “Being a visible black woman in the music industry” that explored a wide range of issues surrounding how her music is created, funded, released, and consumed. “There’s a way that I’m always challenged when I collaborate,” she wrote. “It happens less and less the more I’ve expressed this dynamic, but it’s a lot.”

“Every single peer of mine that is a woman has had to go through that,” she says of being challenged by male collaborators. Despite speaking out, Kelela believes this type of behavior “will never stop happening” because “boys are socialized to be that way.” She points to the studio experience, where female artists are likely to be paired with men who have technical know-how, and the power dynamic that creates. “My experience is always going to be intersectional,” she explains. As both a black person and a woman, she always “experience[s] some sort of shit—it will never not be something.”

In that way, she’s not alone. Albums like Solange’s A Seat at the Table and TV shows like Issa Rae’s Insecure—both of which feature Kelela—addressed similar issues concerning black women in America. Kelela notes that A Seat at the Table and Kendrick Lamar’s DAMN. have helped set a context for Take Me Apart, for which she’s grateful. “It’s a little bit easier to be creative, to be very sincere about what I want to say, and to say things that are vulnerable, because some door has already been kicked down.”

What Kelela is too modest to say is how she has helped kicked down that door, as well. “Cut 4 Me” quickly became a touchstone for artists working outside of the R&B mainstream—alongside music by FKA Twigs, SZA, and others—and Take Me Apart elevates her art to an even higher level, bringing the underground and the mainstream even closer together. “She’s trying to create a bridge between those two worlds,” says Bok Bok. “In the same way Janet [Jackson] occupied that space between pop and R&B, I think Kelela could be one of the greats in the canon.” As she sings on the rainswept “Jupiter,” “I think I know me now,” and it’s only a matter of time before many more people know her, too.

This entry was posted in Music and tagged Kelela, WCP. Bookmark the permalink.