How Church Night Is Bringing Their Wacky, Hilarious Gospel to the Masses 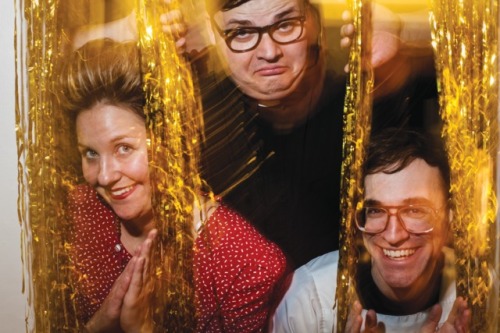 A pastor in cargo shorts. A youth minister wearing a rictus grin and a fanny pack. An adult altar boy in bike shorts with the mark of the beast on his forehead. They are Reverend Dr. Stevedore Maybelline Bidet Esq., Kathy Piechota, and Randy St. Oates Jr. And this is their Church Night.

What follows for the next two hours at the Black Cat’s Backstage is a church service like none other. The irreverent reverend spits fire and brimstone throughout a call-and-response sermon; the church lady recalls smoking meth on the way to Burning Man and leads the flock in a Tears for Fears sing-a-long; the altar boy (or “altered boy,” as they pronounce it) speaks in tongues and serves a shot of whiskey and a tater tot as communion. And they’re not alone: there are a pair of stand-up comics, a flying spaghetti monster burlesque dancer, and a capacity crowd of parishioners.

If it still isn’t clear, Church Night is not a real religious service: it’s a comedy-variety show that updates Dana Carvey’s famed “Church Lady” Saturday Night Live sketch for the Tim & Eric generation. For more than three years, the Church Night crew have turned bars and clubs—in D.C. and beyond—into ad hoc altars. They’ve also turned their show into an award-winning web series, which, if the success of web-to-TV series like Broad City and Drunk History is any indication, could be the first step in bringing their gospel to a global audience.

Church Night began in the summer of 2013, when Linsay Deming (AKA Kathy Piechota) was tapped by You, Me, Them, Everybody host Brandon Wetherbee to produce a show at the Wonderland Ballroom. Before then, she had been hosting a “wacky” variety-potluck show at St. Stephen’s church with her band SweetBread Jim’s, bringing together music, comedy, burlesque, and even edible food sculptures.

“I loved that she made it a family affair, both figuratively and literally,” Wetherbee says. “It wasn’t just music or art or food or poetry or whatever that made it great, it was the curation and variety behind it.”

The Wonderland show would allow her to take things to the next level. “I wanted to make a variety show that had a through-line that would keep the audience engaged,” one that would create “an immersive experience that took people out of their own reality,” Deming says. She realized that a church service is the perfect format for a variety show.

Deming soon recruited her friend Landon Letzkus and his roommate at the time, Jeremy Frank. Letzkus had already developed the Stevedore Maybelline Bidet character for another project and knew he could easily make him into a pastor, while Frank—who studied theater and dance at George Mason University—would be perfect as the show’s scantily-clad altar boy (it was his decision to make Randy mute). They held their first show in April of 2013 at Wonderland to a packed house. “I think we’re onto something with this,” Deming remembers thinking.

Church Night quickly established the rituals and structure of a real religious ceremony: attendees are entreated to high-five their neighbors; Deming’s character plays keyboard for a pop music hymnal; Randy gives out the shots-and-tots communion. The trio believes it is the ritualistic nature of their show that has made it so popular with audiences. “People like that aspect of going to church,” Deming says. “It’s all the other nonsense they don’t like.”

While the group did some less-than-extensive research when first crafting Church Night (“We went to, like, two-thirds of a church service,” Deming admits), all three have religious backgrounds. Deming grew up in Sioux City, Iowa and went to a Methodist church, but moved away from religion when college exposed her to new, secular ideas. Frank grew up in a “really, really small” Orthodox Jewish community in Newport News, Virginia, but—like Deming—chose to live a more secular life in his late teens.

And while Rev. Bidet’s Southern-fried sermons suggest that Letzkus had a Baptist upbringing, that couldn’t be further from the truth. His parents are members of Sufism Reoriented, a spiritual community with an ashram in D.C.’s 16th Street Heights neighborhood; Letzkus was its only child.

“I was terrified by how abnormal this was, especially in D.C.,” he explains, “but my parents went to great lengths to explain that spirituality was up to me.” As a rebellious teenager, Letzkus enrolled at St. John’s College High School, a Catholic military school in Chevy Chase. That didn’t stick, either: “It made me wary of both organized religion and the military.”

Despite the differences in their religious backgrounds, the three principals of Church Night all appreciated the community that a place of worship can provide. Both Letzkus and Frank speak highly of the communities where they grew up.

“We live in a relatively secular circle of friends, and none of us are particularly religious now, but church is really great at bringing people together, looking out for each other, having this core group you can count on seeing,” Letzkus explains. “Maybe the most baffling part of [Church Night] is that we set out to do a comedy show and we ended up with something adjacent to a religious experience,” says Frank, although Deming adds: “But ours is based on absurdity, not on substance.”

That absurdity has forged a community of Church Night fans—whether they have religion in their background or not. Kusuma Prabhakara has been going to Church Night for about two years, and says that she has never ascribed to and was not raised under the auspices of any belief system. For her, it’s Church Night’s satire of organized religion’s hypocrisy—“the bullshit fundraising, the highly-flawed selling salvation to the desperate, the over-the-top theatrics, the forced modesty, the pandering drivel”—that keeps her coming back.

On the other end of the Church Night spectrum is someone like Katie Beard, the daughter of missionaries who grew up in the Baptist church. For children of pastors and missionaries, there are two paths in life: following in their fathers’ footsteps or discovering the secular world. “I have blue hair and tattoos,” Beard writes, “so you can imagine which way the pendulum swung for me.”

But even as she has moved away from the church, Church Night provides a “safe space” to revisit the religion of her youth like “a modern-day 700 Club.” “They are helping me to relive these situations in ways that can make us laugh at ourselves,” she says.

Still, the makers of Church Night take great care to walk the line between transgressive, loving parody and reverence for the good aspects of religion. “We don’t want to make fun of faith or belief in something spiritual or bigger than yourself,” Deming explains. “We’re just taking the structure of church to make a show about these morons who are using religion for their own personal gain.” Or as Frank puts it: “They’re dumb as shit, and sometimes they ask the lord for guidance but he’s got other stuff to do.”

While religion provides the structure of the show, the Church Night crew stresses that it’s all in service of their comedy. Deming is influenced by Mr. Show and Amy Sedaris and grew up doing sketch and improv; Letzkus watched Saturday Night Live with his family and eventually got into underground favorites The State and Stella; and Frank points to the physical comedy of The Carol Burnett Show as a key influence. The format of Church Night allows them to provide different flavors of entertainment: sketch, stand-up, and burlesque; jokes about everything from bodily functions to more biting material about politics. “We want to span the gamut of comedy as much as we can,” Deming explains.

To that end, the trio launched Church Night TV, a five-episode webseries that they produced with filmmaker Theodore Jones, who is also Deming’s husband. The idea was to bring Church Night to the cable access format, adding guest interviews, commercial plugs, hot dog breaks, and segments like the Comedians In Cars Getting Coffee-inspired “Inside Kathy’s Volvo” and a spoof of The Wild and Wonderful Whites of West Virginia. With no real budget and full-time jobs, the show took a year to make, but it was worth it: Not only did it strengthen their character work and writing, but the series won awards at LA Webfest and was an official selection at Miami Webfest and Webfest Berlin this year.

“Our dream would be to get Church Night to a place where we could have a show on TV or streaming or whatever and tour the live show,” Deming admits. “That’s the dream, but why wait?”

Doing Church Night TV DIY-style let them cut their teeth and left them with a digital calling card that can open Church Night to new audiences. “It takes a little while to find the people that are into what we’re doing,” she explains. “We’re not for everybody. We’re the opposite of cool.”

This entry was posted in Comedy and tagged Church Night, WCP. Bookmark the permalink.