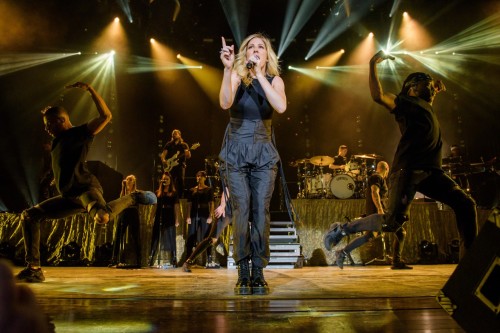 “On a video screen, Ellie Goulding materialized, her clothing white and her visage virginal. But as the music crescendoed, the pristine image dissolved into fragmented cuts of Goulding in black, her fingers extending from cut-off gloves. This yin-and-yang theme played out several times over the course of Goulding’s Monday night concert at Merriweather Post Pavilion — in the costumes of two dance-fighters, in lyrics like “Tell me, black and white, why I’m here tonight” — but for Goulding, the duality isn’t a Jediesque question of light vs. dark.

It’s between being a traditional singer-songwriter and a modern-day pop star, and more than any of her millennial peers, she balances both sides with aplomb.”

This entry was posted in Music and tagged ellie goulding, Washington Post. Bookmark the permalink.