Real World: Boston #12: On cliques and conflicts / “That house needs an enema”

Every friend group in high school and college eventually breaks down into cliques: even if based on shared interests and beliefs, these are friendships of convenience and circumstance, the best-case-scenarios of home towns and college campuses. Lines will be formed, usually over the minor differences that get blown out of proportion by youthful vision. This is no different for The Real World, the ultimate fishbowl friendship. These seven people have been cast specifically for their differences, for the conflict and drama they create.

As the season hits its final stretch, the housemates’ relationships are well established. Other than at work or during their Puerto Rico trip, all seven rarely hang out together. When they finally do sit down and talk at dinner, it becomes clear why. Sean tells Genesis that he feels like she never wants to talk to him; she says she doesn’t have anything in common with him, Montana and Syrus. “We’re not one big happy family,” she explains, “and we’re never going to be.” Sean thinks she’s prejudiced against him because he’s a straight, white male (ha!) and Montana is more explicit: “She doesn’t like being in the house, she doesn’t like hanging out with us, good, then get the fuck out.”

Genesis calls it “high school, reinvented,” and she’s not inaccurate. Cliques have formed with Genesis, Jason and Kameelah on one side and Sean, Syrus and Montana on the other; Elka is the swing-woman. The first group are prone to introspection, and the most likely to seek their communities out of the house, whether that means at gay clubs, black fraternities or artist parties. Sean, Syrus and Montana like to hit the town, have a few drinks and see where the chips fall. 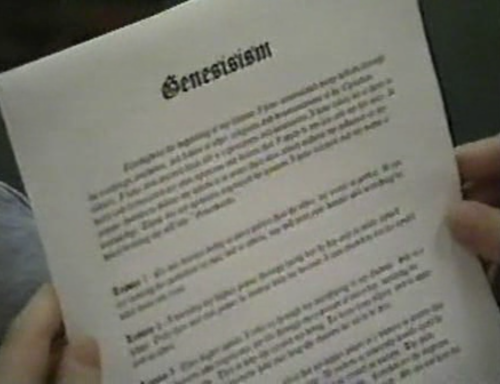 Since her most recent identity crisis, Genesis has found a well a self-respect and assertiveness, and has made a Kameelah-ass list of her own, except not just for dating, but for living life. Her “Genesisisms” are the accumulation of her beliefs and opinions, turned into life lessons. Examples: “Lesson 75: Using your childhood as an excuse only makes you appear more immature, when you are an adult there are no more excuses,” “Lesson 83: Those that deny are the one’s [sic] more deeply involved.” She prints them in a Gothic font and starts pasting them around the house, and some of her housemates are less than impressed.

“I don’t need someone’s dogma when I’m trying to go to the 7-11,” Montana says, critiquing Genesis’s lessons as poorly-written ideas originally stated (and better stated) elsewhere. It probably doesn’t help that some of the Genesisisms seem to be coupled with a target: Jason thinks Lesson 75 is about Montana, while Genesis claims it’s about herself (even if it’s applicable to nearly everyone in the house). Syrus is on Montana’s side and decides to tear them down. “Wait ‘till hell breaks loose.” (It’s interesting how alliances have changed: when he was under attack, Syrus could count on only Sean and Genesis; Montana was perhaps his sharpest critic and is now one of his closer friends.) Genesis takes it as a “personal jab,” and Kameelah and Jason agree. “Were [the Genesisisms] hurting them?” Kameelah asks. “It was an ignorant thing to do; they’re going back up.”

Meanwhile, tensions have also been building in the house because — in a situation familiar to anyone who’s had roommates – they’re all slobs. Plates are unwashed, garbage piles up and the house stinks. Sean and Syrus clean the place, much to Genesis’s amusement; she’s amazed that anyone but her and Kameelah cleaned up. At this point, Sean, Syrus and Montana get in the sign game, writing a message posterboard (“O ye of much filth,” a pseudo-Biblical mock-up of the Genesisisms, plus a cringeworthy swastika next to “food nazis”) and a food-festooned tribute to the “pig of the day.” The first pig of the day is Jason, and they take his dirty plates and put them next to his bed while he’s sleeping (all captured on the Sean Cam, naturally).

Genesis fires the next salvo, flipping their poster and writing, “Just because you cleaned the kitchen once doesn’t make you God. Kiss my ass.” She crowns Sean the “asshole of the year” and the two finally have words while everyone else listens in (Sean stands on a chair in a pretty lame act of intimidation). Sean says she hasn’t spoken up or stuck up for herself before, while Genesis assails his “supremacy complex” and says that’s what she’s finally doing. “That felt awesome,” she tells Jason. “You’re about to see a new side of Genesis and it won’t be pretty.”

Genesis and Kameelah grab lunch with Anthony, who tells them “that house needs an enema.” Instead of an enema, they get another vacation: to Boston’s favorite getaway, Martha’s Vineyard. The tension between the two cliques is apparent by the time they hit the ferry, and — spoiler alert — the trip only calcifies the divisions. There’s no kumbaya moment, no spiritual enema.

At their gorgeous beach house, Jason quickly claims the master bedroom, which he says is perfect for three people — namely him, Kameelah and Genesis — kicking off a weekend of flirting. Genesis teases him, saying she thought he was a “fag;” he jokes that she didn’t notice his “obvious masculinity.” She soon will get a better look at his masculinity: after flashing Kameelah, Genesis wants to see, too (she’s never seen a penis). In a gesture of fairness, Genesis and Kameelah both flash him and they joke about how much closer they feel after seeing each other nude. That’s certainly true for Jason and Kameelah; there’s definitely mutual attraction as they flirt with, tease and chase each other across the house. “You should just have sex and get it over with,” says Genesis.

While Jason, Kameelah and Genesis are playing doctor, the other housemates are having good ol’ fashioned fun, playing charades, cards and taking old-timey photos. They exchange glances as Jason and Kameelah cause a ruckus, and while there’s no actual conflict at the beach, Kameelah is “paranoid” about walking into the house and having all the negativity come back.

They return to the house and begin their final stretch in Boston. There’s a lot of packing up, giving each other gifts and sharing memories — and enough time for some final drama. While Kameelah and Elka have started talking again, Montana stirs shit up, pretending to “look out” for Elka when she’s simply trying to sabotage Kameelah. And she still has no filter: “No offense to you but I’m sick of living with 19 year olds.”

This is where the she said-she said stuff gets complicated. In an effort to clear the air, Elka brings up a conversation where Montana claimed that Kameelah called Elka a “drama queen from Brownsville” that is “so far up Montana’s butt that it’s messing up her digestive system.” Kameelah immediately cops to the latter, but not to the drama queen bit, which sounds suspiciously like Montana. They confront Montana when she gets home but she says she doesn’t remember and that she’s tired of defending herself. Montana then fires back at Elka, telling her she regrets sharing anything personal with her. Elka says she’s being “petty,” and that she thought their friendship mattered more than that. Montana is not so sure. 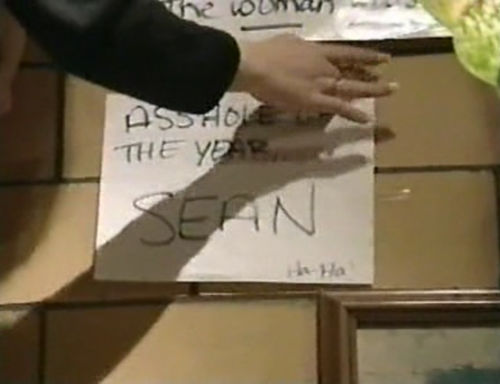 Kameelah and Elka may be on good terms, but the same can’t be said of her relationships with Montana and Sean. She overheard them in the confessional room, taking a shot at her eye-rolling habit and saying that she’s immature for her age and that she’s trying to run their lives. Kameelah doesn’t pull any punches when she sees Montana, telling her to “leave my name out of your mouth.” Montana stands her ground: “I have the right to say what I want to say.”

Kameelah isn’t the only one that finds out how her housemates actually feel about her: Sean finds a note that she left in the bathroom, and shares the shit-talking contents with Montana before giving it back to her, saying she should be more careful with things like that. Kameelah is generally over Sean’s shit, and she’s tired of representing all of black America for the “whitest of white boys.” Sean actually thinks Kameelah is some sort of black supremacist, which would be funny if it wasn’t so clueless.

They eventually have it out, with Sean raising the same concerns he had with Genesis: he feels like she’s building a wall and not letting him into her life, and Kameelah doesn’t deny it: why would she let him in when he refuses to see her as a person but as a spokesperson for her race? Sean’s confrontations with Genesis and Kameelah are telling, as he feels persecuted by women who are gay and black, respectively. Maybe his future as a Republican congressman isn’t so shocking, after all. What is Congress, if not a group of conflicting cliques?

Best Musical Moments: These episodes, more so than the others, sounded like the mixtapes I’d make by recording The Buzz: alt-rock radio staples Beastie Boys (‘Sabotage’) and Soundgarden (‘Fell On Black Days’) next to personal favorites like Our Lady Peace’s ‘Superman’s Dead’, David Bowie’s Reznor-assisted ‘I’m Afraid of Americans’ and Blink-182’s ‘Dammit’. And while I never would have copped to it at the time, the Spice Girls’ ‘Wannabe’ (which Elka gives Kameelah) is possibly the best pop song ever.