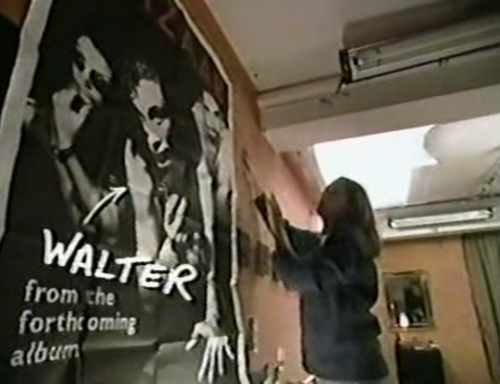 While several of the housemates dealt with long-distance relationships (with varying levels of success), no one is dealing with a longer-distance relationship with Elka. Her boyfriend Walter is an Irish musician with a slight resemblance to Skeet Ulrich who lives in London; the pair met in Greece on holiday and, apart from their week together, have built their relationship over the phone. (The poster that hangs over her bed is promo for his band Bazaar’s lone album, which — alas — isn’t available on the internet.)

Elka says it’s the closest she’s ever felt to love, but not everyone is so sure. Jason “seriously” doubts that he’ll visit her in Boston, while Sean tries unsuccessfully to convince her to date someone in town. When Montana describes her relationship with Vaj as “the most honest” of anyone in the house, she adds, “No, your relationship with Walter counts,” her words dripping with sarcasm.

Her father is generally dismissive of the relationship, but he does offer to pay for half of Walter’s trip to Boston. Walter declines the offer, as he’s going to try his best to make it over on what we can only assume are a struggling artist’s wages. As she waits for Walter to decide if and when he’s going to visit, she plays darts like she’s trying to kill the dartboard. Genesis’s friend Adam is, as always, the voice of reason, telling her that artists get focused on their own work and she shouldn’t be worried that he hasn’t given her an answer either way. When Walter calls to tell her he’s going to visit, she literally jumps for joy. Adam storms over and mock-lectures Walter, “You know she’s been stressing about this all week?”

But before Walter does, her father and brother Brian visit Boston. Elka’s father is conservative and domineering; even though she’s 19, he still controls her finances and she’s weary of disobeying him. His issues run from the personal (he flat out says “no” when she says she wants to get her eyebrow or nose pierced) to the interpersonal. She tells him she’s accepting of Genesis and would go to a gay club if it makes her happy, but he gives her a gay panic guilt trip: “What happens if you like it?”

Walter’s visit looms large. Elka knows that her father wouldn’t approve of him staying in her bed, but admits it would be ridiculous if he crosses the Atlantic and then sleeps on the couch or in a hotel. While she waits for his visit, she dips her toe in the waters of independence, getting her eyebrow pierced. She says she will always respect and honor her father, but she knows she’s old enough to make her own decisions.

Elka realizes that her father is “worried, nervous and sad” that she’s growing up, especially with the death of her mother, who died from cancer just months before she came to Boston; it’s a loss that she’s still processing, obviously. Elka describes her mother as a wonderful woman who touched lives, and her passing has left her family scrambling to assume her roles: Elka’s father has struggled to be “Mr. Mom,” the one she confides in, especially with regards to relationships, and Elka has tried to be a supportive, protective figure for both her father and her brother.

Elka goes back to Brownsville to attend a “style show” dedicated to her mother. She didn’t want to go because she knew it was going to be painful, but didn’t want to look selfish. Plus, she realizes she can’t stay away from home forever. The show goes well and it allows her to honor her mother’s memory and connect with her father, as she continues to chip away at his conservative resistance towards her relationship with Walter. Despite his objections, her mother’s death has put everything in perspective. “I have to start living life for Elka.”

Finally, Walter arrives, in all his long-haired, leathered-panted glory. He charms the housemates the same way he has charmed Elka, making jokes about how it’s “tough riding a Virgin for nine hours.” They might be opposites, but the cliché holds true. The pair spend the days holding hands, making out and picniking; they even go to church. “There was no way I could say goodbye after that,” Elka admits, as Walter crashes on the couch.

Then the inevitable happens: they hook up on the pool table and in the adjacent bed. Montana and Genesis watch on the monitors (again, with the freaking monitors…) but Jason goes down and puts a sock on the camera. Even if he has his doubts about Walter, he thinks they deserve a little privacy.

Eventually, Walter must return to London; Elka wonder why they’re always saying good bye. Walter has plans to visit and work in Vegas, and Elka tells her father that she wants to visit him. Again, he says no outright, because that wouldn’t be “acceptable behavior.” Elka says that she has “all this pressure to be somebody” while in Boston, from her father and her community in Brownsville, but ultimately she has to be true to herself. “I’m going to follow my heart on this one and do what I think is right.”

Best Musical Moments: There were a few obvious musical cues over the course of these episodes: Puffy and Faith Evans’ ‘I’ll Be Missing You’ during the tribute to Elka’s mother, Robyn’s ‘Show Me Love’ for the Elka-Walter love montage, and LeAnn Rimes’ chart-dominating ‘How Do I Live?’ for their tearful goodbyes.

But no song is more evocative of the era than The Prodigy’s ‘Breathe’, which plays as Elka attacks the dartboard. It was also one of the songs that ignited my interest in “alternative” music. I’m not sure if I heard it on The Buzz 103.1 or saw the video on MTV (probably the latter), but I know The Fat of the Land was among the CDs I would get for my 14th birthday, next to Korn’s Follow the Leader and Nine Inch Nails’ The Downward Spiral, because I was finally allowed to own CDs with Parental Advisory stickers. Talk about conservative parents…