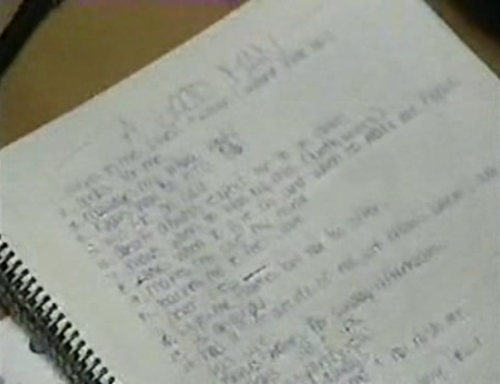 For all the iconic Real World moments that have lived on in the collective consciousness, there’s one from Boston that I didn’t know had found a second life: Kameelah’s list, the scroll of 200-plus requirements for anyone who wants to date her, better known as a Kameelah-Ass List on the OkayPlayer boards and in certain corners of Black Twitter.

The numbered list ranges from the simple (sings to me, teaches me sports, financially stable) to the specific (weight more than 190 pounds, name must have more than one syllable) to the bizarre (has never entertained worshipping the devil). As established, Kameelah has a problem with men, having been abused, abandoned and otherwise mistreated by the men in her life. In that way, the list is a defense mechanism — make it hard enough to date someone, and you don’t risk getting hurt by them — and it works. “Maybe there’s not a mister right,” Montana advises, “but maybe there’s a mister good-enough.”

Kameelah finds some Misters Good Enough when hanging out with local Alpha Phi Alpha members. She’s finally in her element, discussing the issues of the day (ebonics etc) and going to step shows, but she admits that it’s “intimidating”: she’s actually meeting men who fulfill her requirements, something she thought would never happen. She goes on a few dates with the nerdy, overeager Aaron, but cuts it off because he fails two rules: he can’t take a hint and he can’t dance.

Her next suitor is Doug, an Alpha who’s studying mechanical engineering. “He’s a cool cat,” she says, a “very intelligent brother.” Unfortunately, he fails rule #147: have no children. It’s a red flag, because even though he takes responsibility for his daughter, Kameelah is worried about “a mother lurking” somewhere. Even if the situation gives her pause, she’s still disappointed when she doesn’t meet his daughter at Doug’s step show. “Maybe we’ll have to do a little give and take,” she says. “He’s a keeper.”

Doug having a child is not the only problem. Kameelah hears that he was “kicking it” with another girl, and when she repeatedly gives him chances to tell the truth of what happened, he drops the ball. He says nothing romantic or sexual happened, but admits that they “wrestled.” That isn’t enough for Kameelah. “I’m sitting here waiting for you to tell me the truth,” she tells him over the phone, adding before hanging up, “You’re lying to me and you disgust me right now.”

Kameelah reiterates how she feels about most men: they’re inconsistent and inconsiderate, and that often leaves her playing the fool; she doesn’t like the loss of control. “When I take the time to let someone in, I don’t expect you to trash it,” she tells Jason. “All the men I’ve met have just trashed it.” He notes that it’s awful getting cheated on. (At this point, Jason and Timber’s co-dependent relationship has hit the rocks: Timber “stayed with” someone while on a coke binge, and Jason hooked up at a party to balance the scales.)

The next time she sees Doug, he maintains that she’s the only person he’s been seeing, and notes that they’ve stayed away from girlfriend-boyfriend tags because of the inevitable end of her time in Boston. She believes him in the end, saying that it’s not in his nature to be shady and recognizing how sorry he was about the whole thing. They retire to her bedroom and Sean and Elka hear some “strange sounds,” which scandalizes the two most conservative members of the house.

While Elka was quick to condemn Kameelah and Genesis for talking about homosexuality with the kids, she is less concerned with speaking about Kameelah’s supposed sex life in front of them. She’s convinced that Kameelah and Doug had sex, and she tells Montana about the “moaning and groaning, bumping and grinding” — all within earshot of the kids! Kameelah maintains she didn’t have sexual intercourse (pre-dating President Clinton’s “sexual relations” presser by over a year), and tells her to mind her own business.

Sean, Montana and a holier-than-thou Elka keep talking about what happened as Kameelah gets increasingly pissed, telling Elka that she will knock her out if she doesn’t stop. At this point, voices are raised and the other staffers kick them out of the center to cool off. Kameelah thinks this is Elka’s payback for her “outing” her as a smoker; Elka thinks Kameelah was dishing out all her frustration towards her at once.

When they return to the Center the next day, Anthony wants to know what was said. That’s good, because viewers have been screaming “why are they having this conversation in front of children!?” for the entire episode. The only thing that Elka remembers is Kameelah threatening to knock her out, somehow forgetting the non-stop gossiping that preceded the threat. This is an appearance of the Angry Black Woman trope (different from the Angry Black Man one), as Elka’s conservative upbringing again rears its ugly head. Clearly, Kameelah was not going to get violent — she was frustrated that everyone was speculating about her sex life — but because of prejudice (or in an attempt to avoid blame), that’s the only thing that Elka remembers.

Anthony says the obvious: “Melodramatic outbursts can’t happen here.” He tells a remorseful Sean and Elka that he was going to suspend them; instead, he gives them a reprieve, with their next incident resulting in immediate termination. When he talks to Kameelah, he says that she’s the only one of the housemates committed to the kids (she’s been working to repaint the community center to make it bright and more stimulating) and that it’d be a shame to lose her over “petty” arguments; she says the beef is squashed.

The incident leads to some soul searching. Kameelah tells Genesis that her goal was to stay true to herself no matter what, taking positive things from the others and leaving everything else. She contrasts herself to Elka, whose goody-two-shoes facade has started to fall, and wonders if she’s done a 180 as well; Genesis says she has kept the same values, opinions and attitudes. Kameelah says she doesn’t “pretend to be holier than thou,” although how she’s treated some of the other roommates (especially Syrus) would contradict that. In her confessional, Elka wonders who Kameelah thinks she is. “Everyone has to fit this mold — she’s way too demanding.”

Elka and Kameelah might be in conflict now, but it’s not because they’re different — it’s because they’re so similar. They both have high standards for everyone: Elka’s religious conservatism and Kameelah’s pragmatic approach to personal responsibility may be miles apart, but they are both demanding and often holier-than-thou. High standards aren’t a bad thing, but having them isn’t always pretty, especially when they’re thrown back at you.

Best Kameelah moments: On the subway, Kameelah steps up against street harassment, confronting a guy who hollers at her: “That is so rude, why do you guys do that?” she asks. “Tell all your friends, ‘psst psst’ is not how you attract a woman.” Later, when Sean gets hives, she tells him a story about a girl who got herpes simplex from eating Chinese food that had been ejaculated on by three guys — the type of urban legends we all were trading in our teens.

Best musical moments: Kameelah’s club visits and private time with Doug are soundtracked by neo soul of the era: D’Angelo’s ‘Lady’ and 702’s ‘Get It Together’, respectively. Meanwhile, Doug steps to DJ Kool’s ‘Let Me Clear My Throat’, a ‘90s jam that still kills.