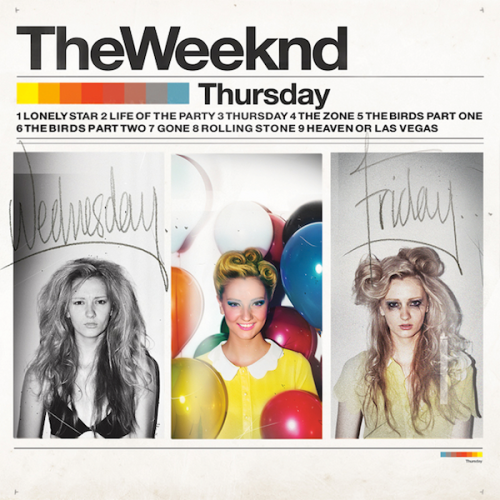 The Weeknd’s Abel Tesfaye is a star now, and he acts the part on his latest mixtape, Thursday. The second part of a trilogy of tapes (Echoes of Silence will follow this fall), The Weeknd continues his examination of the dreary side of debauchery and the failings of fame. In Act II of his musical journey, the Weeknd is further down his drug-induced rabbit hole. For Thursday, that means less hooks, more orchestration, less love, more regrets.

For the most part, the sound is still the same. This is music for the haze of the morning-after: downtempo beats and downbeat instrumentation. That smokey ambiance of House of Balloons still permeates. The thread throughout is Tesfaye’s voice, which ranges from a faltering falsetto (“Lonely Star”) to sharp and focused (“Rolling Stone”). With the focus shifted from his lyrics to his vocals, there’s some vamping and over-singing that distracts from the songs themselves.

The centerpiece of Thursday is “The Birds” couplet. “Part I” is quintessential Weeknd fare. While the caged bird metaphor is a little weak, the chorus (“Don’t make me make you fall in love with a nigga like me”) is the mixtape’s closest lyrical flourish to House of Balloon’s “Drinking Alizé with our cereal for breakfast.” Counterpoint harmonies and the epic drums of 808s and Heartbreak fall away to reveal a finger-picked guitar and Tesfaye, alone: his natural disposition. The screwed down “Part 2” is as much a sequel to “Wicked Games,” with plenty of guitar vibrato and orchestra hits that pack a punch. Sampling Martina Topley Bird’s “Sandpaper Kisses” is a not-so-subtle nod to the trip hop vibe that this album feeds off.

Thursday’s lone guest star is the one we’ve been waiting for: co-signer-in-chief Drake. On “The Zone,” Drake’s typical nonchalance is practically punchy compared to that of Tesfaye. He delivers his punchlines with a staccato flow, filling in the details of The Weeknd’s lyrically bare composition (“Lips so French, ass so Spanish”). And while Drake sang of “Houstatlantavegas,” The Weeknd aims higher. Above the sinister guitar riffs of “Heaven of Vegas,” either the cocaine is talking or Tesfaye has self-actualized. He sings, “They say, they want heaven / They say, they want God / I say, I have heaven / I say, I am God.” With the lifestyle he bemoans and besmirches, maybe it’s a combination of both.