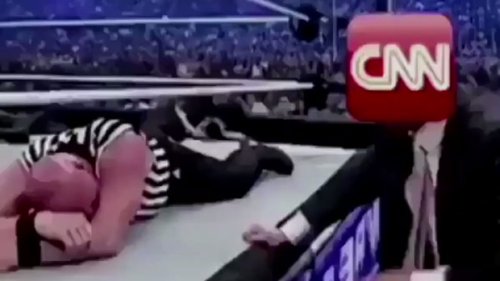 “At this point in the Trump era, it’s hard to imagine the president outdoing himself on Twitter, where he recently boasted that his “use of social media is not Presidential – it’s MODERN DAY PRESIDENTIAL.” But on Sunday—in his latest volley against the news media—he may have done it, posting a crudely edited video in which he clotheslined a figure whose face was covered by a superimposed CNN logo, and then pummeled it senseless.”

“Linda McMahon, President-elect Donald Trump’s pick to head the Small Business Administration, will carry several distinctions should she be confirmed. McMahon, the former president and CEO of World Wrestling Entertainment, who has also appeared at pro wrestling events as a fictionalized version of herself, will be the first Cabinet-level official who has received the Stone Cold Stunner from Steve Austin. She will be the first to have been Tombstone Piledriven by the Demon Kane. And she will be the first to have kicked WWE announcer Jim Ross in the crotch.”