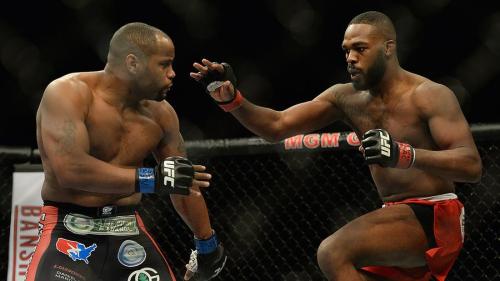 “For nearly two years, Jon Jones and Daniel Cormier have given UFC one of its most exciting and personal feuds. Their interactions have resulted in a Las Vegas brawl, death threats on a hot mic, internet insults, and one brutal title match. As they prepared for a (now delayed) rematch to decide the rightful holder of the Light Heavyweight Championship, the shit-talking has continued: UFC’s last media day culminated with Jones giving Cormier a “suck it” crotch chop, a move popularized by the WWE’s D-Generation X.

That’s not the only thing the feud has borrowed from the world of pro wrestling. As an infuriated Cormier asked Jones last month, “Is this not real now? Are we pretending again?” It was a question that underscores what makes their feud so telling: like a WWE wrestler, Jones is forcing the audience to question the reality of “real” fighting.”

This entry was posted in Wrestling and tagged UFC, WWE. Bookmark the permalink.