"Cougar Town" deserves a better title – and your time 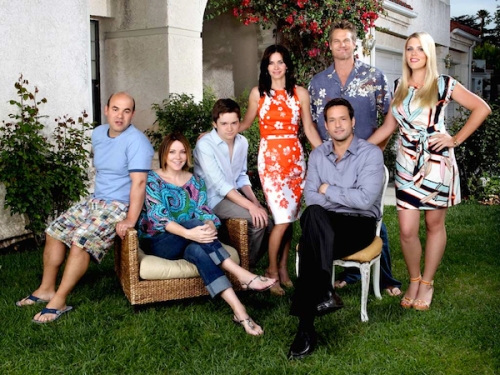 First things first: Cougar Town doesn’t have anything to do with cougars, those mid-forties pursuers of younger men who dominated the mid-aughts. Granted, that’s how things started. As Bill Lawrence recalled on a recent episode of Marc Maron’s WTF, the idea of a sitcom about Courteney Cox chasing young guys was an in-jest-pitch about what gets TV networks salivating. At some point, the joke became an actual pitch, and Bill Lawrence, the showrunner behind Spin City and Scrubs, had a new show on ABC. The show went according to plan for the first few episodes, but it wasn’t a good fit for anyone involved. Unfortunately, Cougar Town had been heavily promoted as such, and the show was stuck with the name, a flashy title that Lawrence calls his “giant mistake.”

A more fitting title? The pilot came pretty close with a joke about “Wine and Scrabble without the Scrabble.” Once it dropped the clichés, Cougar Town became a show about a group of roughly middle aged friends who hang out, drink wine, play games, and pass the time. There’s something refreshing about the simplicity of a show about friends that has moved past a contrived premise to offer a realistic – if zany and comical – look at every day life. In that way, it’s reminiscent of network-mate Happy Endings; Cougar Town is the Happy Endings crew after a few more years and a move to the suburbs.

The Cul-de-sac Gang, like most friends, is brought together by proximity and history. Jules (Cox) is a real estate agent and the gang’s “leader.” She is overprotective of son Travis (Dan Byrd), with whom she shares an unhealthily close relationship, reminiscent of the mother-daughter combo of Gilmore Girls. Both Jules and Travis are on good terms with her ex / his dad Bobby (Brian Van Holt), a semi-retired golf pro who lives on a house boat, as in a boat he has docked in a parking lot. Jules’ best friend is Ellie, played by Lawrence’s wife Christa Miller, who basically reprises her role from Scrubs. Ellie is mismatched with husband Andy (TV veteran Ian Gomez). The gang is rounded out with Jules’ beau Grayson (Josh Hopkins) and wacky, white trash friend Laurie (Freaks and Geeks‘ Busy Philipps).

The comedy of Cougar Town is equal parts off-beat and off-color, like latter year Scrubs. And while there aren’t as many dream sequences, there’s the same kind of “Everyone Learns a Lesson” story dynamics. It’s easy to jump into, if the title has kept you away until now. At the start of the third season, all you need to know is that Travis is returning home after running off to Hawaii due to a failed marriage proposal and Jules is finally on the same page with Grayson about another marriage and more kids (they want both). Plus, all the episodes are named after Tom Petty songs, and the show has traded cameos with Community. With the promo clip for tonight’s episode, it looks like the cast and crew of Cougar Town have finally come to terms with the title (and their precarious place on ABC, considering this season’s delayed start). You should, too.

Cougar Town airs on Tuesdays at 9 on ABC.