Sort-of celebrate the holidays with You, Me, Them, Everybody 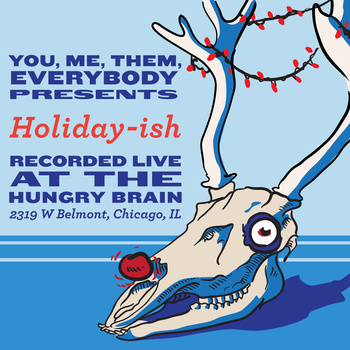 You, Me, Them, Everybody is the combination talk show / podcast hosted by DC resident and Chicago native Brandon Wetherbee. Since posting about YMTE in April, Wetherbee has upgraded his DC gig from a Monday night spot at Petworth’s Looking Glass to sister bar Wonderland Ballroom, in the prime, Friday night pre-gaming slot. He’s also continued to take the show on the road, taking the mic to Chicago, New York, and Baltimore.

In time for the holiday season, You, Me, Them, Everybody presents Holiday-ish, a show recorded live at Chicago’s Hungry Brain. Like YMTE, the 20-tracks find indie comedy side-by-side with a variety of musical styles.

Twee indie pop duo Kitchen Table, Illinois bookend the album with a pair of cute holiday tunes. Musical highlights include the Nicole Atkins-ish Angela James (“Misguided Angel”) and the soulful duet “Merry Christmas (Baby Please Come Home)” by Tiger Cry. The comedy is a mixed bag of twisted holiday memories and off-kilter family traditions. Ever Mainard reminds me of Maria Bamford, and her “Christmas is here at Starbucks!” bit will ring true with anyone who’s worked retail during December. However, note to all comedians and musicians: comedy rap (“Christmas in Dem Jeans”) and Def Comedy Jam parodies (“Alonzo Washington ain’t Scared”) have been done better and with more finesse.

For fans of YMTE, what’s missing is the host. I could’ve gone for a holiday-themed monologue – one of Wetherbee’s trademark acerbic rants. Still, like every YMTE, it’s a chance to discover something new, whether it’s a fresh voice in underground comedy or a promising band to follow.

Stream the album at Bandcamp or (as Marc Maron would say), toss YMTE a few shekels so Wetherbee can continue his late night adventures.

This entry was posted in Comedy and tagged holidays, YMTE. Bookmark the permalink.

One response to “Sort-of celebrate the holidays with You, Me, Them, Everybody”