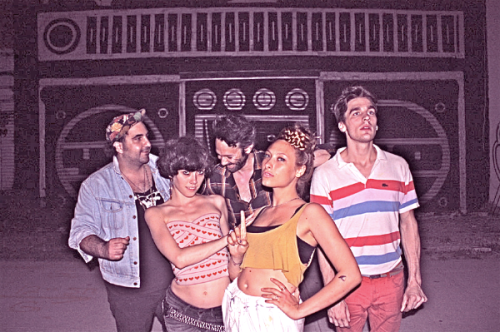 Friends, apart from being the latest in a string of un-Googleable buzz bands, makes singularly tight pop songs. Not future pop or nightmare pop, but weird pop (as they call it).

The band’s music began as demos recorded by Samantha Urbani, who decided – after years of writing and recording music – to finally share her work with audiences. The Bushwick band came together through a mix of history (Urbani has known Lesley Hann since 2nd grade) and happenstance (fleeing bedbugs, Hann and Oliver Duncan stayed with Urbani). Along with Matt Molnar and Nikki Shapiro – and a few jam sessions – the band formerly known as Perpetual Crush played their first show, less than a week after their inception. The jam continues in the band’s live show, which finds the multi-instrumentalists exchanging roles on stage.

Despite designating it weird pop, there’s nothing too weird here. Urbani’s lyrics are sly, her vocals meander but always come back to a solid hook. There is a dance music groove that permeates, thanks to robust percussion and funky basslines. The video for lead single “Friend Crush” is a psychedelic kaleidoscope filled with glitter and costume jewelry.

While “Friend Crush” is a dreamy tribute to friendship, “I’m His Girl” is all swagger. The lyrics offer an empowered take on relationships, and the video feels like a hip-hop clip out of Brooklyn, circa 1988. The b-side is firmly in the next decade, however: a spot-on cover of Ghost Town DJ’s classic “My Boo.” One of the 90s most memorable hooks, it’s a perfect choice for a band whose music is nostalgic yet forward-thinking. And maybe just a little weird.

Friends open for Ganglians at the Red Palace on Tuesday, November 15.

This entry was posted in Music and tagged friends, pop, the verge. Bookmark the permalink.