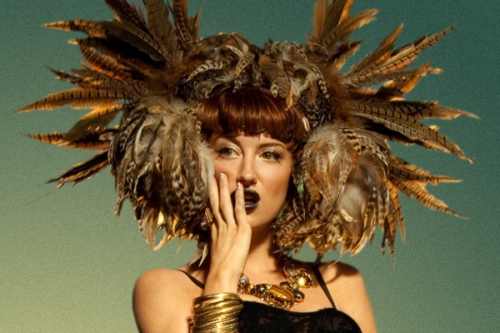 Another day, another UK singer-songwriter. But unlike contemporaries Adele, Leona Lewis and Jessie J, this one didn’t attend the BRIT School, Croydon’s prestigious star-maker academy.

English by birth but a gypsy by nature, Neon Hitch (yes, her real name) grew up traveling across Europe – by bus – as a street performer and trapeze artist. She ran away to India at the age of 16 before returning to London, where she took up singing and songwriting. Before she even released a song, she was touring with The Streets and 50 Cent.

Hitch caught the ear of pop hitmaker Benny Blanco (Britney, Katy, Bieber, Ke$ha, etc.), who helped her sign a production deal with EMI and a record deal with Warner Bros. She’s already written songs for Ke$ha (“Blah Blah Blah”) and Sky Ferreira (“Traces”), and her own material has that same type of sexy, electro-pop sheen.

She’s currently working on her debut Beg Borrow and Steal with Blanco, and two advance singles give a taste of what listeners can expect. Hitch covers her pop bases: “Get Over U” is the female empowerment anthem and “Bad Dog” is the slut-pop jam (“You know I’m yours so rip my clothes off… Just come inside my cage you bad dog”). Like Fugative before her, her singles have been remixed by notable underground producers including DJ Chuckie, Borgore, and Dave Nada, the latter of whom gave a “moombahbased” twist to “Get Over U.”

While her singles have generated a bit of buzz, it’s her genre-hopping cover songs that are really making waves. After taking on songs by Wiz Khalifa (“On My Level“) and Mac Miller (“Donald Trump“), Hitch tackled the hit-of-the-moment, Kreayshawn’s “Gucci Gucci.” Her version is more soulful, with pounding drums and a mellow melody. It’s the kind of cover that stands on it’s own legs, and should have this gypsy living on the grid soon enough.