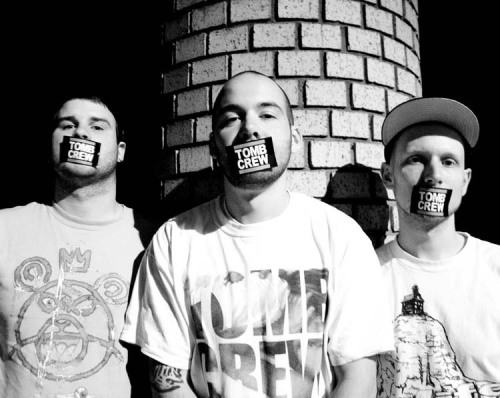 DJing and producing are two related but distinct skills. Not all beatsmiths can work a crowd, so when DJs with a reputation for destroying raves everywhere from Brixton to Brooklyn start making tracks, you know the beats will be battle-tested.

East London’s Tomb Crew is a perfect example of this. Since 2007, DJs Jamie Floodgate and Nick Bennett, along with hypeman Illaman (aka David Penning), have honed their craft across the globe, playing with nearly every UK bass luminary, including Zinc, Herve, Rusko and Sinden, to name just a few. Tomb Crew approaches DJ gigs like a live act, working the crowd into a bass-rattled frenzy.

After a string of successful remixes for acts including Crookers, Drop the Lime and French Fries, the Crew got to work on their own bass creations. With a sound that draws from all strands of bass music, Tomb Crew blends dubstep, club, kuduro, and jungle into a concoction more potent than anything you can buy at a rave.

This year, they released their first EP on Trouble and Bass, a perfect fit for their brand of bangers. Mixing old school jungle with new school bass, the tracks range from the tropical, horn-driven “Oh So Good” to the divebombing “King of the Tweets.”

On their recently released Watch This EP (on Black Butter Records), Tomb Crew continues to update throwback styles with an emphasis on the low end. “Yaphet Kotto Stole My Steez” – a candidate for best song title of the year – oscillates between housey breakbeats and the group’s trademark wobble (and you can download it for free on Soundcloud). The title track, featuring MCs Rubi Dan and Juxci D alongside Illaman, is a slice of tropical bashment perfect for carnival.

Tomb Crew always rocks Mishka, and the guys had a cameo in the Fall 2011 Lookbook teaser. Keep watch for the collection’s official release, and look out for Tomb Crew at a rave near you.