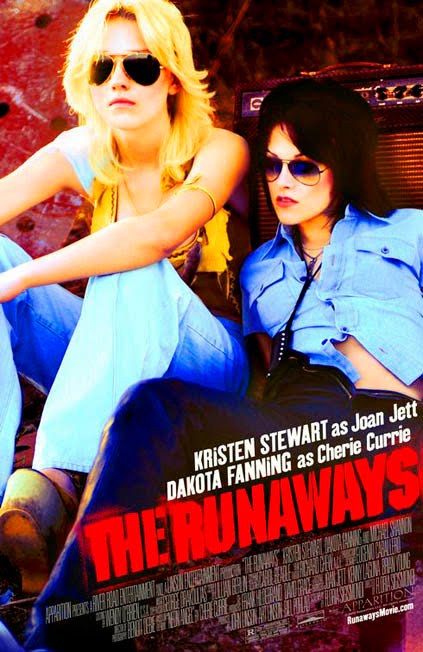 As a film genre, the biopic is a well-worn standard. There’s the meteoric, rags-to-riches story, followed by the inevitable fall and hard-earned redemption. If Joseph Campbell was alive today and lived in Hollywood, he’d write biopics.

In particular, biopics about musicians suffer even worse fates, always relying on the same tropes: abusive or absent families, drug and alcohol abuse, and failed personal relationships. These form the building blocks for what we know about the rock and roll lifestyle, after the band leaves the stage.

With this in mind, I wasn’t expecting much from The Runaways, a film that chronicles the ephemeral career of the groundbreaking band of the same name. But unlike recent classics like Ray and Walk the Line, The Runaways fails to rise above the limitations of genre to craft a captivating film.

For the uninitiated, the Runaways was an all-girl rock band that lasted for less than four years (1975 to 1979), while the members were in their teens: lead singer Cherie Currie, rhythm guitarist Joan Jett, lead guitarist Lita Ford, drummer Sandy West, and various bassists (a fact glossed over in the film, due in part both to narrative ease and legal difficulties). Kim Fowley, a cult legend in the 60s and 70s music scene, helped assembly, produce, and manage the band.

The film does a good job of contextualizing the setting: the glammed out 1970s in LA, where the boys look like girls and the girls look like trouble. Jett (Kristen Stewart) is a leather-clad glue-huffer and Curie (Dakota Fanning) is a barely legal starchild searching for an identity. Fowley (Michael Shannon) is a true degenerate, assembling a group of teenage girls that sell sex in a way that would make Britney Spears blush. Fowley gets it, and Shannon is given the best lines: “This isn’t women’s lib, it’s women’s libido;” “This is press, not prestige;” and “Jail fucking bait. Jack fucking pot.” Shannon steals his scenes, much as he did in 2008’s Revolutionary Road, and Stewart totally embodies Jett, from her singular look, to her mannerisms and voice. Their performances are the highlights in a film where other characters are two-dimensional placeholders.

The film is based on Cherie Currie’s autobiography, Neon Angel, and predictably, she is the central character. Still – the film never provides an emotional connection to her tortured existence, due at times to the writing and at others to Fanning’s performance. Jett comes across much better (in real life, she produced the film). The lack of a sympathetic main character gives the film a disjointed feeling.

Stylistically, writer-director Floria Sigismondi relies heavily on the style she established directing music videos, like Marilyn Manson’s “The Beautiful People.” Unfortunately, the shifting focus, camera tilts, and heavy-handed visual metaphors (a bathtub becomes a deep abyss, broken glass during a fight, etc.) that work in wordless music videos comes across as tired clichés over the course of a two hour film. Yes, when the camera is tilted, the characters are disoriented. If you didn’t get it the first time, maybe you will by the sixth time.

Also, for a movie about music, there is precious little to be found. Sure, David Bowie’s “Rebel Rebel” and the Stooges’ “I Wanna Be Your Dog” show up (the latter over a lesbian scene that is more exploitation than empowerment), along with the Runaways’ hits, but a fuller sense of the era’s sound is missing. Maybe I’ve been spoiled by a soundtrack like the one for Almost Famous, but too much of the film goes by without what should be at its core.

The story of the Runaways is perfect for a musical biopic, and the band deserves a film that is as fun and volatile as it was. Unfortunately, The Runaways buries phenomenal performances by Stewart and Shannon under clichés that are even too much for a genre film to handle.

Two out of five stars. The Runaways is in theaters everywhere on Friday, April 9.

This entry was posted in Film and tagged runaways. Bookmark the permalink.