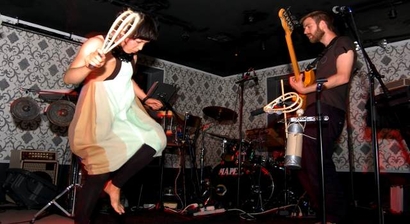 Little Dragon, one of Sweden’s finest imports, returned to Liv on Sunday, after wowing a DC audience on the same stage four months ago. The band, fronted by Swedish-Japanese chanteuse Yukimi Nagano, is touring in support of Machine Dreams, the follow-up to their 2007 self-titled debut, released earlier this month.

A Little Dragon show is essentially a Yukimi show. With all due respect to keyboardist Hakan Wirenstrand, bassist Fredrik Kallgren Wallin, and drummer Erik Bodin (all talented musicians), the main attraction is clearly their lead singer. Yukimi, looking particularly nymph-like on Sunday, is a shark on stage: you have to wonder if she’ll expire if she stops moving, as she sings, dances, and contributes additional percussion to the mix. Her vocal performance finds her modulating and contorting her already unique sound, keeping the audience on its toes.

The band’s performance, much like that of the Foreign Exchange, is greatly enhanced by live percussion, supplemented but not supplanted by programmed ones. The hypnotic rhythms are given a greater sense of urgency than on record. And on Liv’s top-notch sound system, the overall sound is vibrant and powerful: you can feel the bass in your soul.

After taking the stage, the band launched right into Machine Dreams opener “A New” and never looked back. For the next 100 minutes, the band captivated the audience with songs from both of their records, seamlessly transitioning between both. The electronic swing of “After the Rain” was accentuated by Yukimi’s intense yelping. The band is tight, whether embarking on a junkyard percussion breakdown on “Test” or speeding up “My Step” for a better dance floor reception.

Yukimi’s stage banter is always at a minimum, but she did ask if the band could play “a song about nightmares:” Machine Dreams standout “Blinking Pigs,” a new wave tour de force with a killer synth bassline. Her crowd engagement is unparalleled, however, as “Looking Glass” finds her dancing through the crowd, tambourine in hand. It’s clear why she’s greeted with cries of “we love you Yukimi!” at all of the band’s shows.

The crowd seemed worn down by the end of the set, as only truly hardcore revelers were still dancing through the extended outro that ended “Runabout.” However, the encore provided the perfect capper, as the sinister bass rumble of “Wink” became a never-ending jam, transitioning to “Constant Surprises” and back to “Wink.” The band took hold of a house groove and didn’t let go. For fans of Little Dragon, a band that seems to have burst onto the scene out of nowhere, it can all be summed up in the refrain: “Constant surprises / Coming my way / Some call it coincidence / But I like to call it fate.”

This entry was posted in Music and tagged electronic, Little Dragon, show review. Bookmark the permalink.