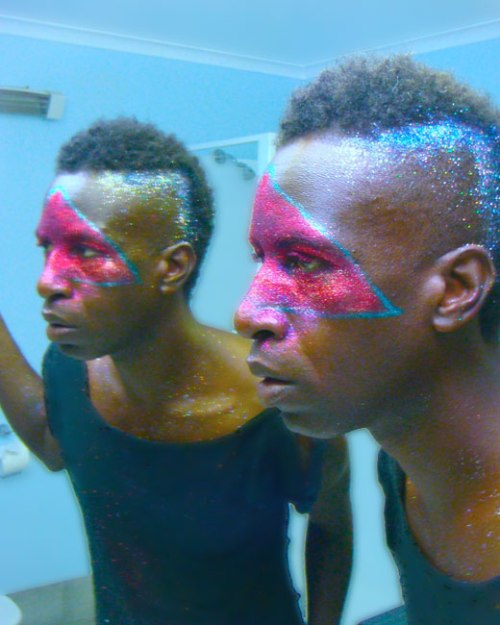 What the fuck? Was it too much Halloween revelry? A case of pre-Monday-morning depression? I mean, I’m plenty acquainted with apathetic DC crowds, barely swaying and head nodding to the music. And while that might suffice for Pitchfork Flavor of the Week indie bands, it is simply not acceptable for Saul Williams. This is revolution music, the soundtrack for tearing down repressive social structures and demolishing the status quo. Is it too much to ask that you move a little? Maybe I’m in the minority, but this type of performance elicits a visceral, corporeal reaction. So be forewarned, you cede the privilege of an up-close view when you fail to interact: I’m bum rushing the stage, so get out the way.But you’re not here for a rant; you probably want to know about the show. So, without further ado…

On Sunday night, the Black Cat hosted the Afro-Punk tour. But Afro-Punk is more than just a tour, it’s a movement. From their 2003 documentary of the same name, to a five-year strong festival in Brooklyn, Matthew Morgan and James Spooner have been tireless advocates for urban alternative culture, be it music, film, or extreme sport. A 19-date tour that brings some of the subculture’s finest performers across the continent was the next logical step.

Opening the night’s festivities were the Smyrk, whose straight-ahead rock sound is infused with R&B, thanks to the powerful lead vocals of Doron Monk Flake. The band reminds me of a more radio-friendly Sevendust, especially on stand-out song “The End of Jason Todd” (yes kids, that is a comic book reference), which combines grinding riffs with Flake’s soaring vocals. The Smyrk gives me hope for mainstream rock music, a genre that has fallen on tough times.

Next up were Krak Attack, the combination of multi-instrumentalist CX Kidtronik and Tchaka Diallo. CX is an Afro-punk trailblazer who has been pushing the envelope since the 80s, influencing Atlanta artists like Lil’ Jon and Andre 3000 and collaborating with Saul Williams. Krak Attack is pure crunk rock, as CX assaults his MPC and Tchaka engages the crowd and tries to get girls on stage. Unfortunately, Black Cat security was having none of it, so the party didn’t really get off the ground. Their performance is sonically and visually abrasive, but in the right setting, it could be a lot of fun.

Following Krak Attack’s short set, the stage was prepared for true legends Living Colour. Despite some technical difficulties and an audience born mostly after the band was formed, the reaction to the funk-metal pioneers was largely positive. From the historic opening riff of “Cult of Personality” to the breakdown of “Type,” Living Colour captivated the crowd with their unrivaled musical talents. After a set that included classics and a handful of new material, it was clear that Living Colour were the first and most influential Afro-punks.

After the impressive range of openers, and with Betty Davis on the sound system, it was time for the headliner: Saul Williams, in full Niggy Tardust makeup and costume. Joined on stage by a backing band that included CX Kidtronik (and his daughter Saturn at various points), Saul was on-point, dropping the free verse poetry that he built his reputation with, and nailing songs from throughout his discography. The beats were familiar, but tweaked and manipulated by CX, giving old favorites dubstep and drum-and-bass makeovers.

At one point, Saul mused that he had more energy than the crowd. “Isn’t DC where some great punk rock came from? I thought you’d be more… aggro!” The first several rows got into it, but that was about it (hence my rant), but this didn’t deter him from further interaction. After performing “NiggyTardust,” Saul spoke about how we deal with (or rather, fail to deal with) race continues to hold everyone back: our concept of “the other” is false, and we need the pendulum to swing back to center, between the extremes of race consciousness.

For the crowd, it was a poignant message that did not fall on deaf ears. This is what Afro-Punk is all about: fostering the development of a culture that lies outside the norm, letting kids who were told they weren’t “black enough” be themselves. The audience also included plenty of white kids who were told to “stop acting black,” so the point stands: the “other” is a lie.

This entry was posted in Music and tagged Saul Williams, show review. Bookmark the permalink.