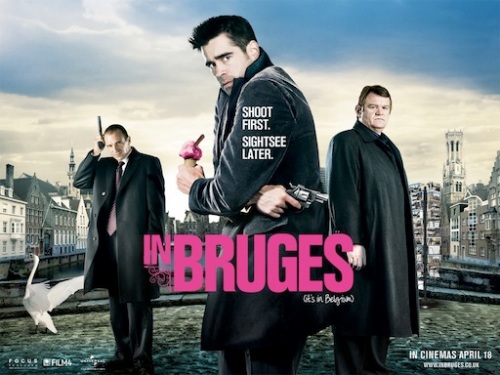 This won’t be a long review, because I can’t imagine speaking at length about this godawful waste of celluloid. While I hadn’t expected much, it received a respectable 77% on Rotten Tomatoes and looked better than any of our other options. Obviously, dumping season has begun.

The movie fails in many, many ways. It is not sharp enough to match the verbal ratatat and dark situational irony of a Quentin Tarantino or Guy Ritchie flick, which it tries desperately to be. It never establishes how dreadful the titular city is, instead substituting fat Americans in Yankee caps and bitchy Canadians for real satire. And it can’t decide what kind of film it wants to be: the dialogue isn’t funny enough for straight comedy, the action isn’t any good for a crime caper, and the dark moments are played for drama instead of black comedy. Also, the screenwriter thinks midgets, racism, and senseless gore are comedy gold.

Colin Farrell and Brendan Gleeson are wasted as a pair of hapless hitmen, as is Ralph Fiennes as their dreadful boss. They all play on the criminal stereotypes that have been done to death in every ironic crime movie since Pulp Fiction.

If you’ve already seen every Tarantino or Ritchie film and you want some of the style but none of the substance, see Smokin’ Aces or Layer Cake. But stay the hell away from In Bruges.

This entry was posted in Film and tagged in bruges. Bookmark the permalink.